Allsure Insurance Director Aaron Donaldson was recently featured in Insurance Adviser magazine for his involvement with the Tour de Cure.

There’s a personal satisfaction that comes with getting involved in a cause and giving back to your community – as Allsure Insurance’s Aaron Donaldson found out firsthand.

The insurance industry, especially insurance broking, has some of the most generous and community-involved people in the world. Perhaps it’s because brokers see the worst when it comes to claims – catastrophes, accidents, disasters, interruptions and illnesses – that they feel so strongly about getting involved in their local communities, about giving something back. Insurance Adviser recently had the pleasure of meeting with one such individual, Aaron Donaldson of Allsure Insurance.

Co-run by Aaron and his sister Melissa, Allsure was started in Geelong, Victoria, from the ground up in 1986 by their parents, Ian and Christine. The siblings bought the business in 2007 and transitioned from a multi-endorse authorised representative to an authorised broker, as part of the Community Broker Network (CBN). Currently the business has four staff and has recently expanded its presence into Hobart, Tasmania.

Aaron began his insurance career in 1993. He’s married to his beautiful wife Sarah, with two gorgeous step-kids Lola, 11, and Eddie, 9. He’s also a part-time employee of Telstra Broadcast Services, taking part in live sports broadcasts as an engineer/operator for the Big Bash Cricket, Tour Down Under, NRL, Marathons and Melbourne Cup. He also started up his own drone and videography business (onairmedia.com.au), which has given him the opportunity to present at NIBA events and the CBN conference on drones and insurance.

GETTING INVOLVED IN THE TOUR DE CURE

Aaron initially found out about the Tour de Cure directly from one of its founders, Gary Bertwhistle, who  poke at a CGU AR Conference in Queensland. He also worked with Mark Beretta, a regular V8 Supercars commentator for Channel Seven, when Beretta was pit reporting and Aaron was handling the on-board cameras. “I went to school with Mark’s little brother Paul,” explains Aaron. “At the time, Paul owned a bike shop in Geelong and would go on the Tour as a mechanic. I’d helped Paul’s fundraising efforts in past years, and when my dad passed away from brain cancer in 2014, I signed up to help out.

“I first applied as a volunteer, and listed my skills and abilities, and that I had a homemade drone to bring along to help with the filming,” says Aaron.

“Now every year I do drone footage for the Tour documentary and help out with video production and other digital media requirements. It’s added a new perspective and dimension to the documentary, which hopefully increases the reach and appeal of the messages, to enhance the fundraising and awareness of Tour de Cure.”

ABOUT THE TOUR DE CURE

The Tour de Cure’s vision is a world without cancer. Its purpose is to raise vital funds to support the doctors and scientists who have dedicated their lives to uncovering a cure. Since 2007, the Tour de Cure has had more than 6,000 participants, raised over $35 million and funded 306 projects (with 22 scientific cancer breakthroughs!). Additionally, more than 100,000 kids have been reached through the ‘Be Fit! Be Healthy! Be Happy!’ program, helping to demystify cancer and encourage kids to make healthy lifestyle choices for their future.

HOPPING IN THE SADDLE

Last year, Aaron decided to truly put his money where his mouth is and participate in an actual Tour de Cure ride himself. He began his training, and immediately found that trying to find the extra eight to 10 hours a week to ride meant getting up “stupid early” at least three days a week.

“It was a great journey,” he says. “I felt better health wise and improved my level of fitness with no impact to my joints. At one point on a training ride, I was unsure if I could tackle the 60km I needed to do that morning, as I hadn’t ever gone that far before. After I’d done the hardest part of that ride, I was on my way home, with the sun shining and the wind blowing at my back, I just started flat-out crying. I would have looked a right sight to the commuters on the way to work that morning!”

All the hard work paid off, and Aaron rode in the Tour de Cure Peter Mac Hospital 3-day Victorian ride, completing over 100km a day around Victoria and the top of Tassie. 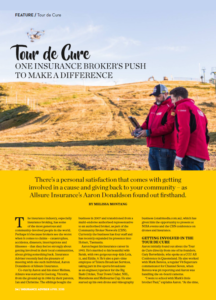 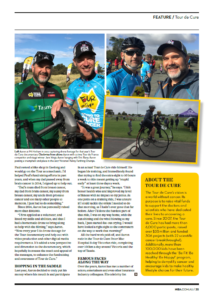 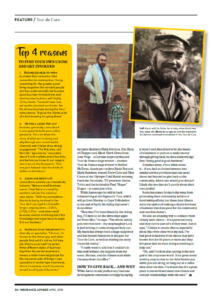 FAMOUS FACES ALONG THE WAY

While Aaron says he will be back volunteering at the Signature Tour, which will go from Mackay to Cape Tribulation at the end of April, his riding days aren’t done either.

“Now that I’ve been bitten by the riding bug, I’ll have to do the three days again for Peter Mac,” he says. “The whole family gets involved now – my stepdaughter Lola is just itching to come along and help out. My mum has always been a huge supporter and has hosted functions in the past for Tour de Cure, as well as sharing the story via social media.”

“I really want to add that I couldn’t do this stuff without the support from my sister, Melissa, and the Allsure staff while I’m away from the office.”

HOW TO GIVE BACK… AND WHY

While Aaron would preface any business development comments strongly by saying it wasn’t and should never be the intent of a business or person to make money through giving back, he does acknowledge that “doing good is good business”.

It makes sense, if you think about it – if you had to choose between two similar service providers and one went above and beyond to give back to the community, which one would you choose?

Likely the one that isn’t purely about their own profits! Some insurance brokers shy away from promoting their community service or fundraising efforts, but these days clients want the option of making a choice between a business that does good for the community and one that doesn’t.

It’s also an amazing way to connect more closely with clients – it’s a personal story, and they can be part of it if they want. Aaron says, “It helps to retain clients, especially those that were close with my dad. I’ve had good donations from clients that have known him for 30 years or more and they felt great that we were doing something to help out.”

“Oh, and I reckon that cycling is the new golf in the corporate world. It’s a great social activity, easy to chat to the rider beside you while you roll along, or hang out at a coffee shop after the ride. I’ve found that it’s a great place to network and meet new clients and cement relationships with old ones.”

TOP 4 REASONS TO FIND YOUR OWN CAUSE AND GET INVOLVED

The game of drones is gaining momentum globally, changing the landscape (well, airscape) for both commercial and recreational users. The endless possibilities of drone use, from delivery services to aerial videography and even sheep herding are showing that the sky really is the limit. END_OF_DOCUMENT_TOKEN_TO_BE_REPLACED

Is your business using the power of big data to its advantage? More and more companies are embracing the power of numbers, turning them into actionable insights and getting ahead of the competition. If you’re looking to make use of the goldmine of information available at your fingertips, here’s a rundown of what you’ll need to know before you make a start. END_OF_DOCUMENT_TOKEN_TO_BE_REPLACED

The turn of the season is fast approaching, and with so many of our clients in the farming industry, we thought we would share some top tips from expert resources on how to ensure your hay cutting season in 2021 is your best yet. END_OF_DOCUMENT_TOKEN_TO_BE_REPLACED